The Berlin Package by Peter Riva 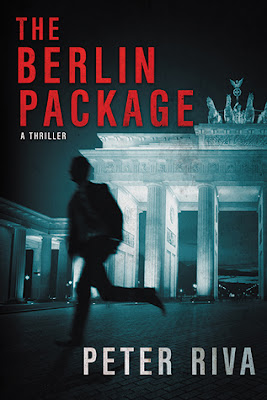 A film producer, a handsome star, and an African safari guide must race to protect themselves and the world from a terrorist nuclear trade.Film producer Pero Baltazar thought he was taking a Berlin filming assignment. He needed the work, needed to get back in the saddle after fighting off a life-threatening experience in East Africa—al-Shabaab had attacked his crew, intent on a much larger terrorist attack. Suddenly he finds himself under orders from his part-time employers at the State Department and the CIA when he is handed a mysterious package. It’s an assignment he doesn’t want. The problem is, it’s a job contracted by mysterious patrons who are prepared to kill him if he doesn’t deliver.Pero—now in far too deep—turns to friends, old and new, to help him unravel the mystery of the package, uncover connections to Nazi concentration camp gold recently sold by the US Treasury, and thwart the ex–Stasi chief, now head of a powerful banking group.In this fast-paced sequel to Murder on Safari, Pero calls on Mbuno, his friend and East African safari guide, to anticipate the moves of his enemies as if they were animals—dangerous vermin—who have kidnapped both the film star and director. Mbuno’s tracking skills may keep them from getting killed—provided Pero can rope in more help and keep the CIA at bay.Exhilarating and expertly crafted, The Berlin Package is a gripping, page-turning thriller set in post–German reunification Europe.
~ MY THOUGHTS! ~

So, like all Peter Riva's other books, I loved it! It was a tad slow in the beginning, which is why it didn't get the full 5 stars, but other than that I didn't have any problems.

This book brings back Pero, and he is in yet another situation that could mean his death. I love that Pero seems to always find himself in some serious predicaments. It makes for a great story. And I love that with this character, the constant dram level issues he is facing is believable. It isn't this goose chase of plot fillers. It seems to honest to goodness be Pero, and his life. This is one of the reasons this series intrigues me so much. I was worried before going into the first one that it would seem forced. And still had my reservations before this one, but it isn't. It just seems like another story in the life of Pero, and I sure hope there are more to come!

This story is a little different, as it kind of follows Pero and his connections in the State Department, which we got to see in the last book. It takes place in Berlin, and Pero must deliver a package. In this book we see Pero and some of our old friends from the previous books. Mbuno makes his appearance, which pleased me to now end. I loved how the author incorporates the kind of feel of the previous book into this one as well, even though it isn't taking place in East Africa, but in Berlin.

I enjoyed this book immensely. It was slow, like I had said, but it sure picked up fast. Once it started going, I was unable to put the book down until the end. If you are looking for a quick and immensely action packed read, I suggest you pick up this book. As well as the previous one. They are great, summer blockbuster reads, for sure!

Author's Bio:
Peter Riva has spent many months over 30 years travelling throughout Africa and Europe. Much of this time was spent with the legendary guides for East African hunters and adventurers. He created a TV series in 1995 called Wild Things for Paramount. Passing on the fables, true tales, and insider knowledge of these last reserves of true wildlife is his passion. Nonetheless, his job for over forty years has been working as a literary agent. In his spare time, Riva writes science fiction and African adventure books. He lives in Gila, New Mexico.
Connect with the author:   Website   Twitter   Facebook
a Rafflecopter giveaway

Posted by BookishlyDevoted at 5:20 PM